#52Ancestors
The year was 1980. I was pregnant with my first child and due any day. We had lots going on at the time so it didn't dawn on me that it was almost Valentine's Day. On February 13th, 11 p.m. my eldest son entered the world. I know it was just  a bit before but what a wonderful Valentine's Day gift it was, once I realized it was only an hour away. I'd say it was close enough.

Fast forward six years, I was now pregnant with my third and was given a due date of - guess what - February 13th.  Well that year we were having snow storms right at that time and though the doctor said the baby was ready to pop a few days before, the baby had its own ideas of ready. It hung on another week, heated and protected by its mother, and the day the snow cleared was the day we welcomed our new family member to the world.

Ever since my Valentine days are sandwiched between my oldest and youngest offspring's birthdays.
Posted by Gloria at 11:57 PM No comments:

#52Ancestors In the Census

Today I want to talk about a brick wall I had that wouldn't let up.

It concerns a young lad, Hersch Oks, of about 17 years of age upon arrival in the United States.

I found his ship manifest by chance looking for something else and it showed he was the son of my husband's great grandfather's brother Moische. He arrived at Ellis Island in Aug 1911 and was supposed to go stay with a cousin, an A. Perlmutter, in Brooklyn NY.

Well I couldn't find him in the 1915 NY State census nor in the 1920 federal census nor could I find that supposed cousin. I couldn't find them in city directories either. I knew that he could not just vanish into thin air. So where the heck was he?

So I decided to look for possible name changes and discovered he changed his name to John somewhere along the line. So I went back and searched the census records for 1940, 1930, and 1920. One found him in Nebraska, another in Detroit, and a third elsewhere. Okay but now I also had him married in two of them and a widower with a 13 year old son in a third. All, by the way, show his age of arrival differently. One shows him as a naturalized citizen.  Also one showed him as Oaks, another as Ocks.

Still working on this but the brick wall has opened up a bit. Any ideas as to where I should go from here? Comment below. Thanks
Posted by Gloria at 11:44 PM No comments:

Who would I like to invite to dinner? Gee, I have so many but I guess I will go with Moshe Ulanovsky, my husband's maternal grandfather since he is the only one who would have any info on that maternal side. I want to know who his wives were (we think there were 6) and which children went to which wives. I want to know who his parents were and who the parents were of my husband's mother's mother. I want to learn why he had so many wives and what he did for a living. We know very little and there is so much we'd like to know that dinner alone would probably just touch the basics.
Posted by Gloria at 12:45 AM No comments:

He was a farmer and speculator in apples for shipment to England and the United States and held some first grade financial securities. A Liberal in politics, he attended the Methodist Church in Lawrencetown and strongly believed in the life hereafter.

If anyone has any info or stories to add, please do so in comments below.
Posted by Gloria at 12:17 AM No comments: 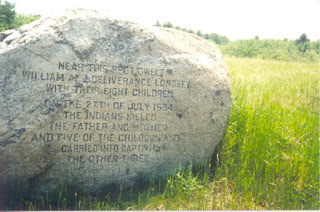 This is the spot
where my 7X great grandparents, William Longley and Deliverance Crispe along with five of their eight children were buried in Groton, Massachusetts after being masacred in a raid by the Abenaki Indians in July 1694.
Posted by Gloria at 9:45 PM No comments:

#52ancestors I joined a challenge to post something relating to one of any 52 ancestors per week for 52 weeks. Here goes week 1 - topic Start - I chose to start with one of my brick walls that is opening up - Hersch Oks AKA John Oaks or Ocks.
Today I want to share that I have made one step further in breaking the brick wall for Hersch Oks who arrived in NY as a 17 year old in 1911. I was able to find three census records for him that show a name change to John Oaks or Ocks. The 1920 census of Scotts Bluff, Nebraska shows him living at 1706 Twelfth Ave apt. #402 with his wife Mary (surname unknown) a son Albert 5 yrs old and a son Fred 3 1/2 yrs old. This one shows him as being 24 yrs old (meaning in 1911 he would have been 9 yrs old). But it also shows him as arriving in 1915 not 1911 which would put him at 21 not 17 as listed on the ship manifest. Note he was born in 1894.
In the 1930 census of Cook County, Illinois he was living at 330 E 136th Place apt. #181 with a family of Henry Manweiler, his wife Kate and children William 23 yrs old, David 19 yrs old, and Helen E 5 yrs old. It also shows him and his son Fred living with them as boarders. It says he was 36 and Fred 13. So ten years prior Fred was 3 1/2 and is now 13. But John was 24 and is now 36. One of these is wrong. This one shows him arriving in 1913 putting him at 19. It shows him working in a cement block company. The 1920 one had him working at a sugar company. The third census for 1940 in Wayne County, Michigan shows him with a wife named Hazel. He is now listed as 43 (this should be either 44 or 46 or ?) and is now working as a paint sprayer in an auto company. He is living at 15875 Alden Avenue, Detroit, Michigan. Neither Albert nor Fred are listed here. There is still work to be done on this but this breakthrough leads me to seeking marriage records for him and Mary and him and Hazel, looking for Albert and Fred separately, seeking naturalization and name change papers etc. I can think of all the things that need checking but what should I do first?
Posted by Gloria at 9:37 PM No comments:

Check it out: http://www.benzinga.com/pressreleases/16/11/p8656505/mixed-roots-foundation-officially-launches-global-adoptee-genealogy-pro.
Posted by Gloria at 11:25 AM No comments:

Posted by Gloria at 1:34 PM No comments:

10 Things Adoptees Want You to Know

We've now come to the last item on our list, number 10.

Don't tell us we look adopted.

Heck, what is an adoptee supposed to look like?

Did Michael Reagan look adopted? How about Babe Ruth? Or George Carver Washington? Charlie Chaplin? I could go on and on. The list is huge. Did all these as a group have a special look that called out "I'm adopted"? Don't think so.

So why do you think adoptees should look adopted, whatever that look might be? Until you  can answer these questions, think before you speak. Adoptees will see you in a different light.

Has anyone ever said this to you? What was your response? Leave a comment.
Posted by Gloria at 8:00 AM No comments:

Gloria
In my research ventures online and off I come across many items of interest to family history and genealogy seekers that I will share them here. I write nonfiction and from time to time might throw in something of interest along those lines.